Every year, I live tweet a bunch of award shows, mainly to check out who has the best beard. Comedians Jack Baker, Matt Drufke, and I started using #beardwatch on Twitter, last year or so, and this year, I decided to actually give away awards for different types of facial hair, except for mustaches, simply because there weren’t any worth mentioning. Now, we are by no means the first people to use #beardwatch, so I’m not laying claim to this, but we are the first people to use it exclusively for award shows… Don’t quote me on that. Here’s the results, through the power of my Twitter account. 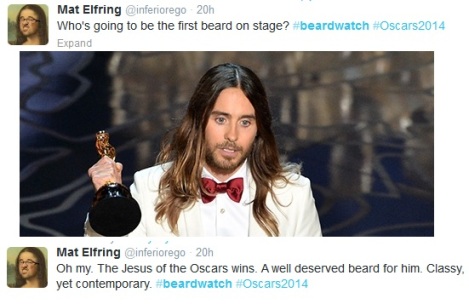 Now, Best Supporting Beard was supposed to awarded to the man with the best beard, who is not up for an award and was not on stage prior to the announcement of the winner. This award was given an hour before our winner ended up on stage to present an award. 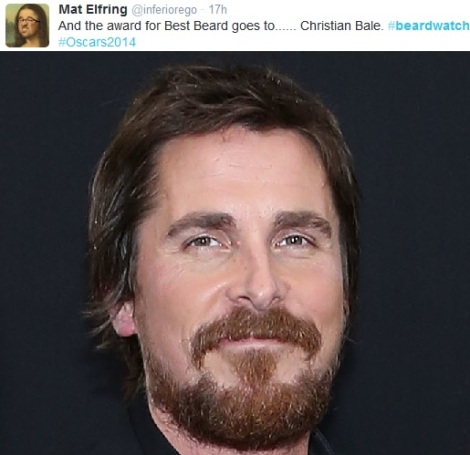 *Then…. something remarkable happened. 12 Years a Slave won best picture and this guy came on stage and dethroned Christian Bale moments after his win.

His name is Anthony Katagas and he was a producer of the film. 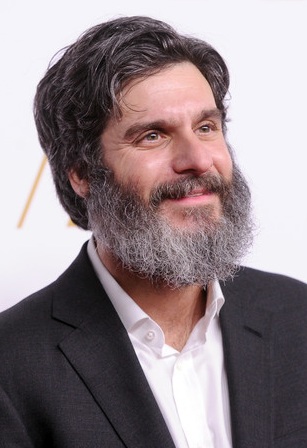 Here’s the rest of the weird beard-related tweets from that night.

One response to “Beard Watch: The 2014 Academy Awards”